Marienbad, together with its orchestra grew up in the renowned region of music and the time of their common rise at the beginning of the 19th century corresponded to the period of an unusual bloom of spa bands. The birth of the permanent orchestra was determined by the decision of K. C. Reitenberger, then superior of Tepel monastery, the owner and founder of the spa, to legalize music performances in Marienbad in 1821. 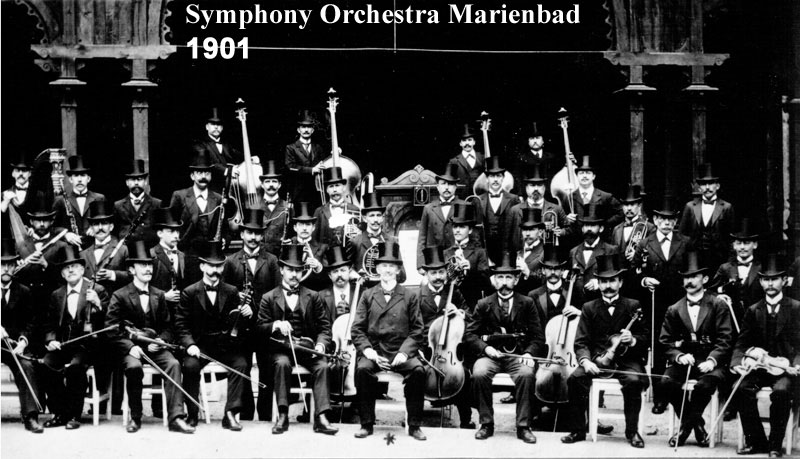 The relatively small band which played at the springs several times a day, greeted the guests and took part in balls, increased very soon to a middle sised orchestra. To promenade concerts further concerts increased, café concerts from which symphonic concerts developped took an important place. From the end of the 19th century the orchestra of Marienbad inclined distinctly to the performances of symphonic music which was usually played on the colonnad. The capacity of Marienbader musicians to cope with an unbelievably extensive repertoire, their ability to perform as soloists, the success in tours abroad, the public appreciation of the composer G. Spontini, the fact that the spa orchestra inspired L. Spohr to the composition of the Waltz op. 89 " Errinerung an Marienbad" and the fact that R. Wagner dedicated them the copy of a part of the score of the opera "Rienzi" show their high level. The conductors were chosen very cautiously, often to the recommendation of Wiener music authorities.


The development of the Marienbader orchestra was determined by the level of Marienbad itself and by the composition of its clientele and its activity reflected clearly the calibre and the orientation of the town councillors. The Marienbader musical tradition was not interrupted by any social or political changes and the performances of the orchestra were not stopped either by a war or by post war events. In connection with the fundamental change of the spa operation in the fiftieth of the 20th century the orchestra combined the function of a spa band with that of a permanent symphonic orchestra. Besides promenade concerts it organized regular symphonic evenings, took part in musical festivals, e.g. in the renowned F. Chopin Festival of which it was the cofounder, organized concerts for children and youth and spread its touring activity also abroad. Since 1971 it bears the present name "West Bohemian Symphonic Orchestra".

Traditional cultural values and a high level of artistry, together with ever-growing interest from the public (both Marienbad residents and spa guests) are proof that symphonic music belongs in this world-famous spa town. It is therefore heartening that in recent years, the orchestra has been receiving heightened support from the city, local businesses, the region and the Ministry of Culture.