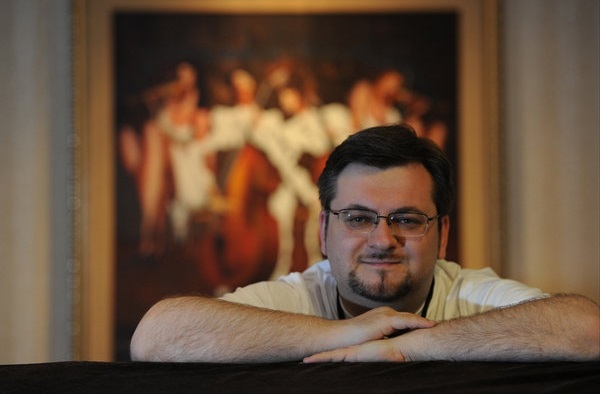 • Alim Shakh holds a position of Principal conductor of the Novosibirsk Philharmonic Chamber Orchestra (the top chamber orchestra in Russia).
• Since 2012 he is also Principal conductor of St. Petersburg State Conservatory Opera and Ballet Theatre.
• Head of Mediacentre of St. Petersburg State Rimsky-Korsakov Conservatory
Alim Shakh graduated from St. Petersburg Conservatory twice: in 1998 (choral conducting) and in 2001 (symphonic and opera conducting). He was taught by such celebrated conductors and teachers as Fyodor Kozlov (1927-2003) and Ilya Musin (1904-1999).
Prof. Musin was the creator of the Leningrad/St. Petersburg school of conducting and an internationally known innovator in advanced conducting techniques. Alim Shakh is the last of Prof. Musin's students, who gets knowledge from first hands.
His outstanding conducting technique lets Maestro conduct the most difficult pieces of the classical and modern music. Talented works of distinguished modern composers have been marvelously interpreted by the conductor, so it is no mere chance that Shakh is held in esteem. Among his recent premieres is the vocal cycle "Run of the Time” by B. Tishchenko, dramatic musical “Anna Karenina” by V. Uspensky, "Tragicomedy” by S. Slonimsky, Russian premiere of "Symphony No. 2” by John Corigliano. In 2008, Boris Tishchenko composed his Symphony No. 8 which he devoted to Alim Shakh (premiere in Novosibirsk on 20.12.2008, in St. Petersburg on 24.03.2009).

“…He is excellent at hearing the score and revealing even the hidden rhythm and intonation connections. The conductor’s interpretation by Alim is filled up with profound meaning and logic. When interpreting music, Alim follows the best examples, but does not stick to clichés. He presents the music in his own perception. Such a conductor is a real catch for a composer. ”- Boris Tishchenko.
Alim Shakh is a prominent Russian conductor, he worked with orchestras in Moscow, St.Petersburg, Prague (Rudolfinum), Weimar, Paris, Linz (Brucknerhaus), London (Royal Albert Hall). Maestro conducted the Saint Petersburg Philharmonic Orchestra, the Moscow State Symphony Orchestra, Novosibirsk Philharmonic Chamber Orchestra, Orchestra of the Kazan State Opera and Ballet Theatre, Opera and ballet theatre of Saint-Petersburg conservatoire, International Symphonic Orchestra in Great Britain, Weimar Chapel Orchestra (Germany), Chamber choir Grand Rapids (USA), Californian opera theatre (USA), Prague Symphony Orchestra, la Orquesta Sinfónica Nacional Costa Rica, Slovak State Philharmonic, Philharmonie de Paris, Moravian Philharmonic Orchestra and many others.
Since 1999, Alim has been working in St. Petersburg Conservatory Opera and Ballet Theatre where under his auspices the following works were presented: “The Tsar’s Bride” by Rimsky-Korsakov, “Eugene Onegin", “Iolanta” and “The Queen of Spades” by Tchaikovsky, “Cosi fan tutte” and “Le nozze di Figaro” by Mozart, “La Boheme” and “Tosca” by Puccini. In 2001, Alim won the award “Artists Public Recognition” in California, the USA, for “Carmen” by Bizet. Under auspices of Shakh, the operetta “Viennese Meetings” by Strauss was staged in 2004 and the operetta “Der Zarewitsch” by Lehár in 2005. Nowadays, the conductor collaborates with the musical theatres in St. Petersburg, Kazan and Novosibirsk.
Alim Shakh is the author of many noted creative projects: He was the first one who held concerts of International Symphony Orchestra “Let’s Make Music”. In 2005 he became a co-other of the new trend in arts called Cinemaphonia (in collaboration with Tonino Guerra, Theo Angelopoulos, Rudolf Barshay, Valeri Gergiev, Boris Tishchenko, Andrey Petrov). The world premiere of Cinemaphonia took place in Royal Albert Hall, London. Since 2000, Alim Shakh has been teaching at St. Petersburg Conservatory. Under his supervision, the Concert Chamber Orchestra of St. Petersburg Conservatory went on tour to France (Russian Culture Week under patronage of Maurice Druone and President Jacques Chirac in 2004). In November 2004, Alim directed the Conservatory Symphony Orchestra who accompanied to Luciano Pavarotti during his last concert in St. Petersburg.